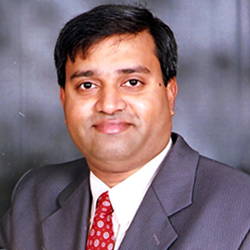 Founder and CEO of DoorBox Corporation

Founding DoorBox Corporation was a result of my personal experience. My Mission to end the emotional pain associated with losing a package of high emotional value. I lost my father, my Mentor. I lost a part of my life since we shared a strong and special bond. As time passed by, I began missing him terribly and realized the intensity of that bond even more.

The closest memory of my father was him wearing his glasses and a Swiss wristwatch that adorned his wrist for close to 40+ years. He was very proud of his watch. One day after his passing, I called my mom in India and asked whether she would mind sending me my father's last pair of glasses and the watch. She sensed my emotions and gladly obliged.

I got a delivery notification and was quite excited. I left work early to retrieve the package from my porch. To my utter dismay, I did not find any package on my porch. My heart skipped a beat. I was totally shattered.

I wondered what happened.

In utter desperation, I began checking the video footage. My father’s watch, my memories were stolen, probably tossed in some bushes by a Pirate. For him it was worthless, for me this loss meant a world, and it was irreparable.

I felt as if I lost my father once again. That is when I realized no amount of cameras can safeguard our prized memories.